My friend, Laurie, has been on my mind so much!

This past summer, she was diagnosed with cancer.  She had her tonsils removed in late June.  The doctors say that her cancer is caused from the HPV virus and the number of cancer cases continues to increase.  The doctors also say Laurie's prognosis is excellent!  A couple of weeks after her surgery, the chemo started.  She had 4 very intense chemo treatments and then 36 radiation treatments.  Laurie had her last radiation treatment on the day before Thanksgiving. 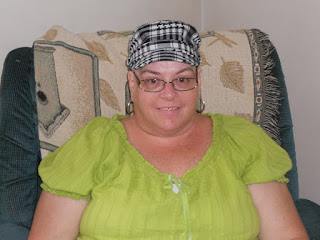 While Laurie was going through the chemo, we took turns sitting with her because each chemo treatment was 5 days long and she would get so tired and sick that she needed someone with her 24 hours a day.  When the radiation started, a different friend went with her each day because she was unable to eat solid food and was very weak.  Laurie still isn't feeling well and continues to have an extremely sore throat.

When Laurie started the radiation treatments, I started a small piece that I worked on each day.  This was my daily prayer time, so while I stitched, I prayed for Laurie.  I finished the piece and gave it to Laurie not as a reminder of what she's been through, but as a reminder that many prayers have been said for her and that she is loved.  The words on the piece represent qualities that Laurie has always shown to her family and friends. 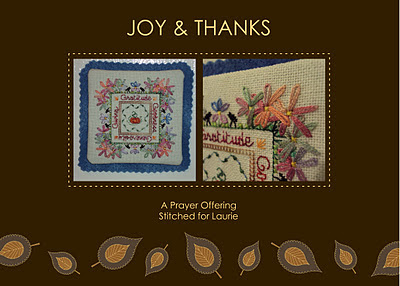