I'm happy to report that I spent NOTHING this month!  I did get the March and April A Year in Chalk designs that my hubby got me for Christmas.  It comes as an auto-ship and since he ordered it in December and he pays for the auto-shipments, I have not included that in my monthly SFS.

I must admit, however, that I'm finding it increasingly difficult to resist purchasing all the designs and stash I keep seeing online.

I'm looking forward to seeing how everyone did this month! 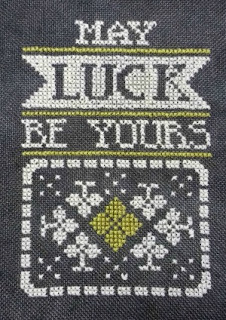 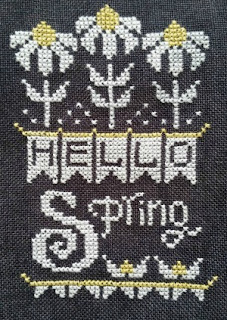 These will be finished with a coordinating fabric border as a flat piece with magnets so I can display them in my kitchen with the
A Year in Chalk pieces.

For the first time in several years, I don't have consignment pieces to work on.  I'm loving the freedom of stitching whatever I want.  The problem is that there's just way too much I want to stitch and I actually have several projects started with more waiting. 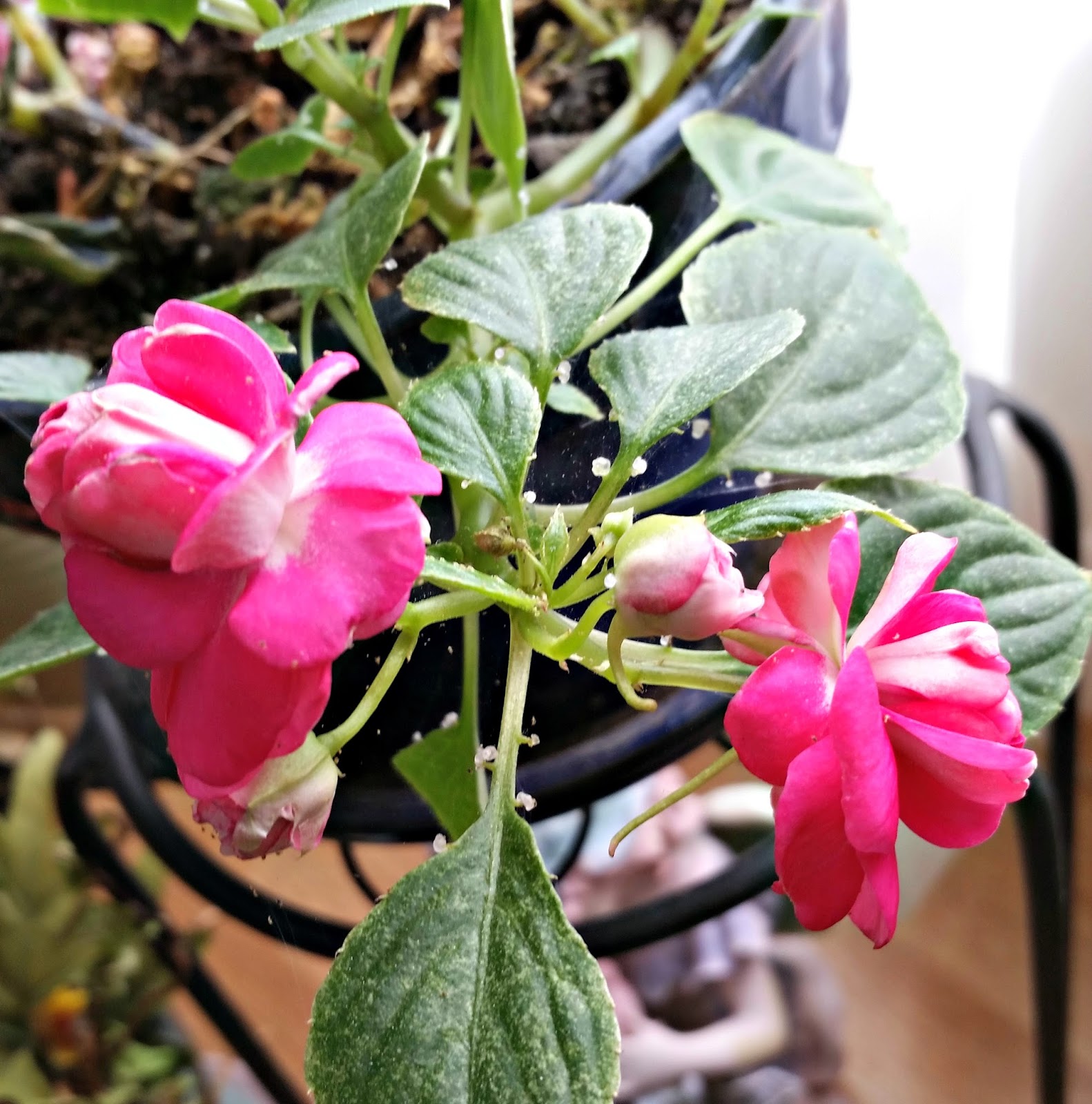 Last fall, this Impatient was brought inside for the winter.  It had been hit with frost and only a small portion of the plant was saved.  I'm now being rewarded with blooms!  Anyone know what the whitish things on the plant are?  They look kind of like grains of salt and appeared when the buds appeared.

Are you having spring in your area?  I say we are having the typical spring here -- sunny and warm one day, cold and snowing the next!

A Year In Chalk 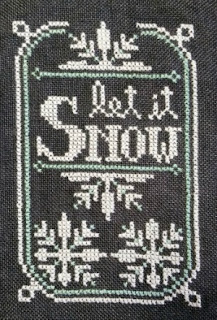 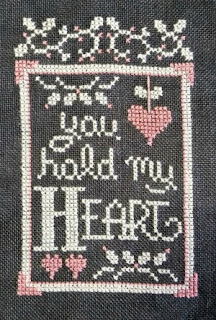 I love chalkboards and chalkboard art so it's no surprise that I fell in love with this series.  Hubby gifted the fabric, threads and charts for the whole series to me for Christmas.  I've read on some stitchy blogs that they love the WDW fabric and decided to give it a try.  I have to say, however, that I had so much trouble stitching on this fabric that I wouldn't choose to stitch on this fabric again.  Even though I like the way these look, the fabric feels thin and flimsy to me and I think that makes my stitches looks sloppy.  I normally stitch in hand, but had to use a hoop, which is uncomfortable for me and because of the dark fabric, I can only stitch these during the day when the sun is shining.

I'm going to finish these in a flat ornament style and I'm thinking I'll add magnets to the back to make displaying them easier.  I'm looking for precut matboard.  Hobby Lobby used to sell it in different sizes, but they don't have it any more.  Any ideas where I can order it?

Anyone else stitching these?  What fabric are you using?
How are you finishing them?

Spring is coming!  In the past week, we've had much warmer temps and our snow is just about all gone.  One day the snow pile was 2 feet deep and the next it was completely gone.  The Resurrection Lilies and Tulips are coming up and I saw 2 Robins in the backyard this morning!

Have a great weekend!

Late last summer, I heard an unusual sound -- over and over and over again.  It was loud and clear, but I didn't know if it was a bird, a tree frog or some kind of insect/bug.   I even did an internet search trying to find out just what I was hearing.  Except I couldn't find anything because I couldn't accurately describe the sound.

As the weather turned colder, I no longer heard the sound...

Early in February, I saw a new bird visitor in my back yard.  I only caught a glimpse of it at first and it was so fast as it moved between the tree branches. 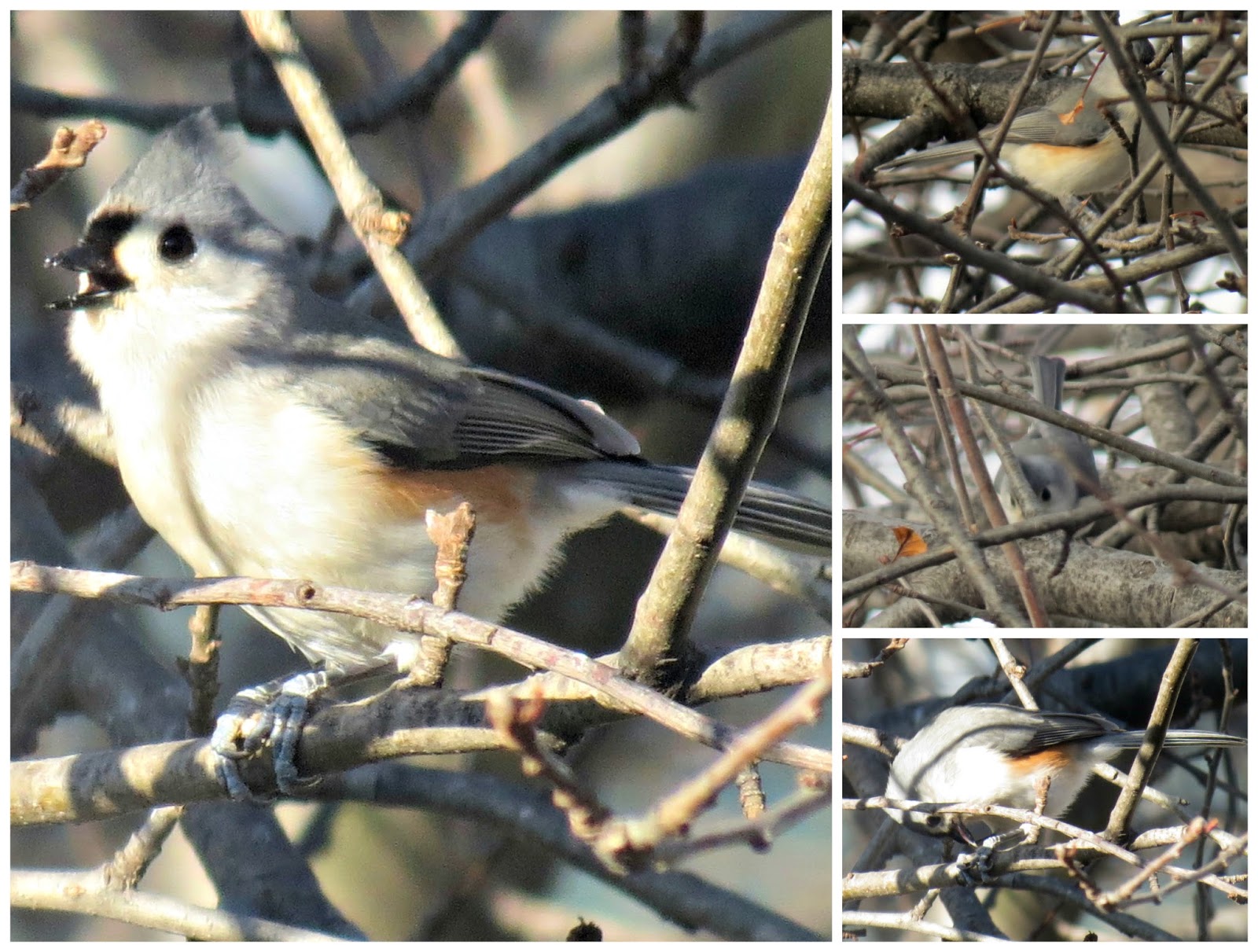 Finally, I was able to get a few photos.  My new visitor is a Tufted Titmouse!  They have such a cute, happy expression.

A few days after my first glimpse of this little bird, I heard that sound again.  I'm finally able to identify where the sound comes from -- it's the Tufted Titmouse's song!

I hear the Tufted Titmouse much more than I see them.  Their song is so loud and clear.  I can even hear it when I'm in the house.