Inquiring minds have been asking...

...did I get the pastel M&Ms?  Nope.   Hubby did go looking for them though.  He couldn't find any so he came home with these in yellow, pink and purple instead.  They are good too, just not my favorite. 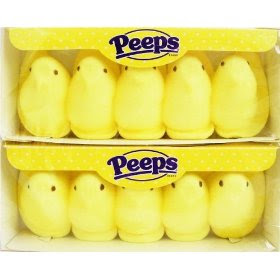 Stitching for hours and hours...

...is not good for my posture! Aches and pains greeted me the next morning.  I managed to get about 9 hours of stitching in on one day last week!  I don't usually get that many hours in one day to stitch -- usually it's only an hour or two at the most.  I've been working on a baby birth record that I'm anxious to get finished, so when I get a chance for long stitching periods, I take it.  Don't we all do that? 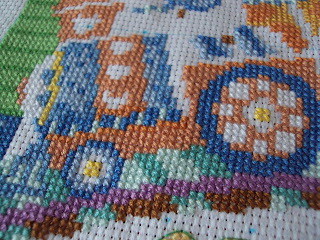 I usually stitch "in hand" meaning that I don't use hoops, scroll frames or q-snaps.  Alot of times if I'm stitching a large area of one color I will also use the "sewing method" for stitching as well.  As a result of using the sewing method, the middle finger on my right hand always seems to get a hole from pushing the end of the needle through the fabric and the index finger and/or middle finger on my left hand always gets poked when I feel for the needle from the underside of the fabric.  You can imagine how my fingers look after a 9 hour stitching session.

I've been on the look out for something that would work as a thimble, but still allow me the ability to feel what I'm doing.  I've tried a small piece of moleskin, the non-bandage part of a bandaid, several kinds of bandage tape and the end of the needle always pokes a hole through whatever I'm using.

Somehow I found this product called Poke-A-Dots by Jillily Studio http://www.jillilystudio.com/pages/poke-a-dots.html and ordered some.  I used one "dot" and found that it was too thick for my method of stitching because my needle kept slipping off the dot.  I may try them again if I'm using a sharp sewing needle for sewing on a button or some other type of hand sewing. 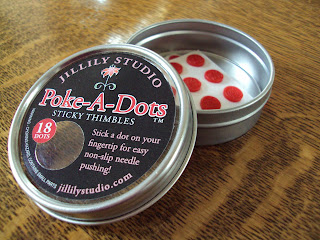 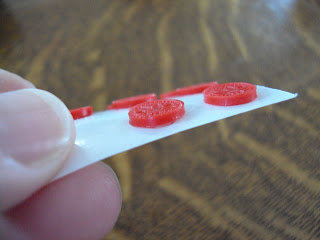 However, that red tape they used to seal the lid is awesome!  I'm not sure if it's a type of electrical tape or what.  It is slightly stretchy and molds to the shape of whatever it's stuck to.  Hubby thinks it could be plastic tape.  Whatever it is, it works so well for my method of stitching.  I snipped off a small piece and stuck it on my finger and was able to stitch with it for HOURS without the end of the needle ever poking through it.  If I remove it carefully, I can even use it more than once!  It doesn't leave any color or residue on my needle, thread or fabric.  It does leave a little adhesive residue on my finger when I remove it, but rubs off easily. 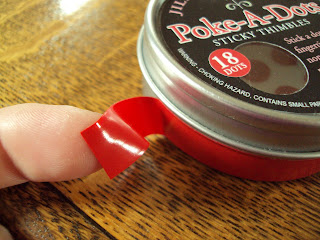 The weather was much, much better for the second weekend of the tournament than the week before.  It was warmer and once the clouds moved out and the sun was bright, it was actually fairly comfortable sitting in the wind.  We've had alot of rain in this part of the state, and the custodians were out on the fields trying to push the water off and away.  It was rather an useless attempt because water was seeping up from the saturated ground.  In some areas, the players were standing in ankle deep water and mud.  Not my idea of fun, but I think some of the girls liked getting wet and muddy.

Where are the Plain, Pastel-Colored M&M's?

This is SERIOUS (well maybe only to me), so don't laugh!

Why is that every store in my area only have Coconut M&M's and Dark Chocolate M&M's?  Is there a shortage of ingredients? Did someones hubby buy them all to fill a 5 gallon bucket for his special wife?

I'm easy to please and just one bag of plain, pastel-colored M&M's would make my day! (hint, hint)

Wishing everyone a Happy Easter if you celebrate it!
Posted by Pam in IL at 8:48 AM 4 comments: 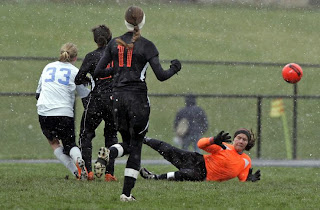 On Saturday we sat out in the wind and rain for the first game in DD's soccer tournament and it was brutal!  Even though we had bundled up with triple layers of clothing and winter coats, we still froze!  I even walked to the Dollar General a block away and bought another blanket!  After the first game, DD's team had about an hour break.  During that time the weather became windier and colder.  It was raining huge raindrops that turned to wet snowflakes within the first 5 minutes of DD's second game.  The pic above is not my DD's team, but another team playing and you can see the snowflakes.  We were able to sit in the car for the second game and when we looked across the field, the snow was coming down horizontally and it looked like a blizzard.  The other end of the field was barely visible!  They should have called the game, but they didn't so those poor girls played on.  The first half of the game was 40 minutes long and half time was reduced to 5 minutes long.  The refs talked to both coaches and the second half was reduced to 10 minutes.

Finally, today it's sunny (for now) and the temps are headed to 50, but more rain is coming with strong/severe storms predicted for tonight and tomorrow.


Stitching Update
I've been getting about 15 minutes a day to work on Christmas ornaments and a baby sampler.  Maybe I'll be able to get pics posted soon.  I want to make Bride's Tree ornaments for my niece, but I'm still in the "planning and designing" stage.  Better get going on that because her shower is in August and wedding is in September.


Finally Upgraded...
...to a smart phone!  It was such a hard decision for me because I like my 4 year old flip phone.  It's small, fits easily in my pocket, pretty durable and easy to use.  I chose an android phone by HTC because my daughters both have an HTC and they've kept them for over a year, which is a big accomplishment for them!  This must have been a stressful thing for me because I had a nightmare dream  that my new phone came and it was the size of a VHS cassette tape!  My daughters are getting a little mad at me because I'm asking too may questions about how to use the phone. 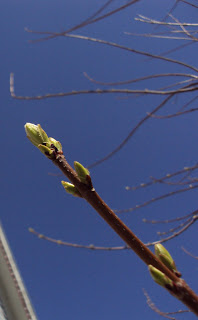 I am amazed that in a short time a little bud on a branch will develop into a big, dinner plate sized leaf.

I am also amazed that a little bud on a branch and all the other little buds on branches are responsible for making my eyes burn, itch and water, my sinuses and ears plugged and my head hurt from all the pressure.  Yep, it's allergy season and here in North Central Illinois, the prediction is that this will be the worst allergy season that anyone can remember.  Yippee!


A Sad Anniversary
This Sunday will be a whole year since my Dad died.  I miss him so much every day and it seems when I'm driving I always hear a song that makes me think of him.  So often when the song that makes me think of him is playing, I see his old semi truck driving down the road.  It's unusual to see his old truck because his company is not from this area.  I'm taking that as a message from my Dad, letting me know that he's watching over us.

I was helping my mom go through some of Dad's things last week and we came across some pictures.  My Dad had these pics, along with ones of him with each grandchild when they were born, all together in his drawer with his wallet and hankies.  My sisters and I got married within months of each other in 1989 and surely kept my Dad busy.


No, this next one isn't a sister -- but just to be fair, it's my brother on his wedding day and this picture was also in Dad's drawer.
My Dad had 4 kids, 7 grandkids and 4 great-grandkids, but never had a picture of all us together.


More Surgery for Mom
My mom got up from her chair after lunch the other day and noticed she had a pain in her back.  This pain didn't go away or get better so we went to the doctor the next day.  After all the tests and x-rays were done, it turns out she has a compression fraction of the thoracic spine.  We saw the orthopedic doctor today and he wants to do surgery to stabilize the fracture.  My mom had major spinal surgery last June and again in July and is in no way ready to have additional surgery.  She also fell last summer and fractured her left wrist, which has now caused carpel tunnel syndrome and the same doctor wants to do surgery to relieve the CTS after her she recovers from the back surgery.  No dates set for either surgery yet.

Some 2011 Finishes, WIPs and Questions

I have a few finishes for 2011 and am working on some LHN Christmas Ornaments (pictures of those will be posted another time).

So my questions are ~~ at what point do you decide a WIP is NEVER going to be finished and that while you started it so many years ago, your tastes have changed?  What do you do with your WIPs when you've decided it will not ever be finished?  Do you trim off the part you've already stitched and discard it, saving the fabric for another use?  Do you give the WIP away for some other stitcher to finish?
Posted by Pam in IL at 2:42 PM 16 comments: 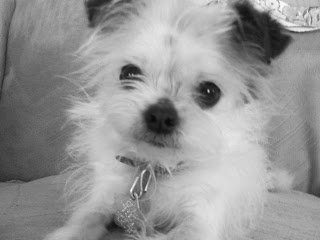 This is Snickers, a 14 year old, 4 pound Chihuahua/Shih Tzu mix.  Her nickname is "Queen" because she truly believes she runs the household!  She loves to snuggle and does not know she only weighs 4 pounds. 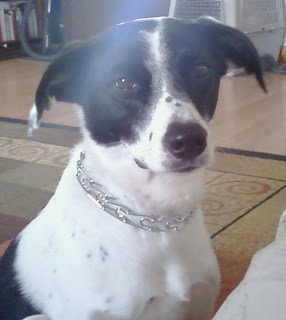 This is Dots (or Dottie) and she is a 5 year old Border Collie/Rat Terrier mix, but we think there is Dalmation somewhere in that mix too.  She was supposed to stay small and only weigh 15 pounds, but she's got very long legs and weighs 35 pounds.  Much, much bigger than we ever anticipated and she has the energy to match her size.  She has more toys than my daughters ever had and she likes to get them all out at one time and leave them all over the living room floor.
Posted by Pam in IL at 12:03 PM 4 comments:

I Am A Procrastinator!

See, I really don't want to work so instead, I decided to create this blog. Please be patient with me as I learn about this and get everything set up.
Posted by Pam in IL at 11:37 AM 3 comments: