I ran out of thread for one of my WIP's and purchased a skein of GAST.

Since I decided to participate in Stitch From Stash, I took some time to go through my WIP's, UFO's and designs waiting to be started.  Here are just a few:

I have tons more and if there was never a new design published ever again, I'd still have more than enough to keep me stitching! 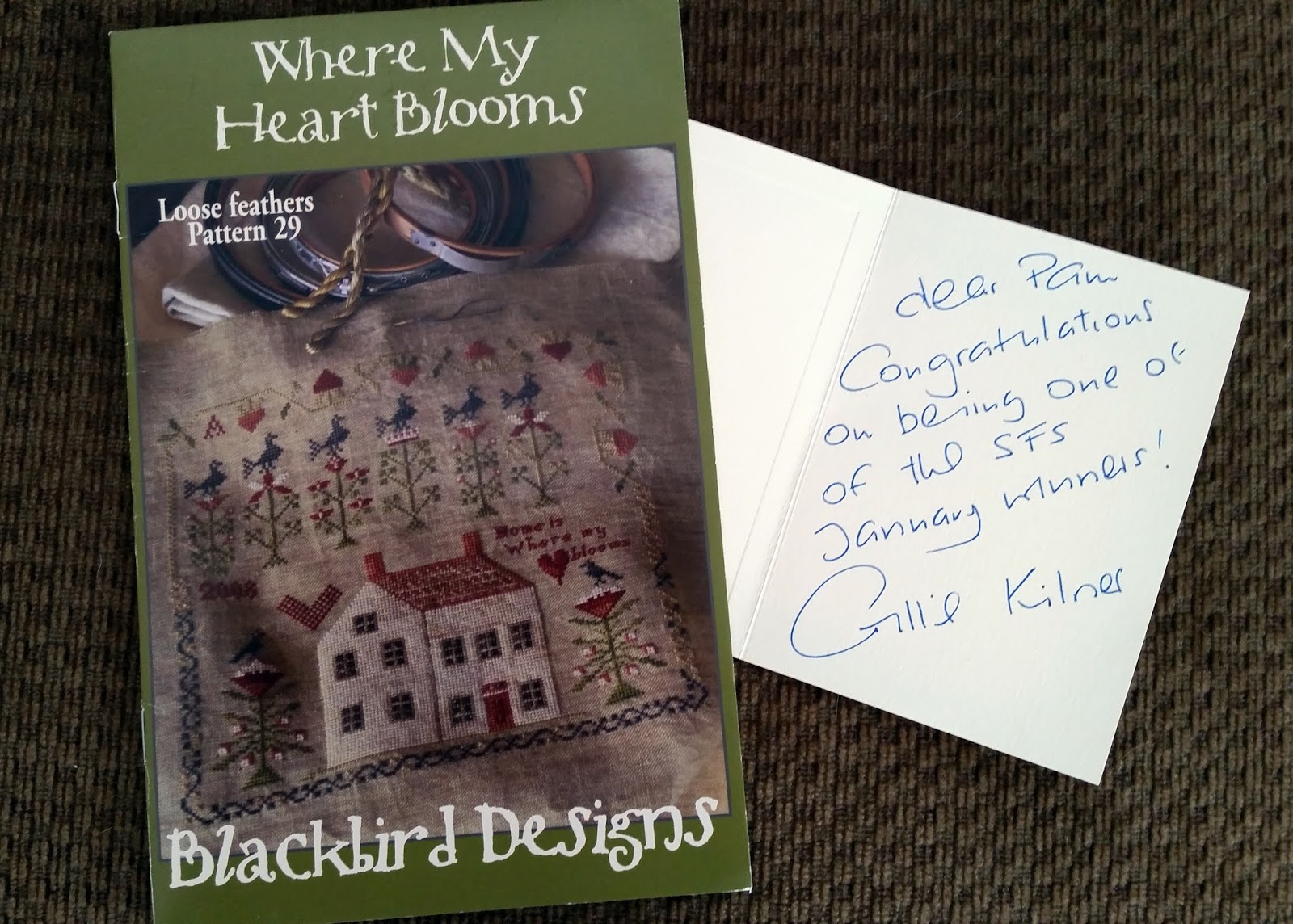 This is the design I won in the SFS January drawing.  I'm so excited to receive this chart as it's been one I've wanted.

It's been stressful around our house.  A few weeks ago, Hubby went to their weekly company meeting and was informed that the company he had worked over 32 years for had been sold.  The new executives were there to introduce themselves and assure all the employees that "everything would be fine" and to tell them "don't worry about a thing".  Maybe I watch too much TV, but those statements were huge red flags to me.

Since then, very few questions have been answered, and even more troubling to me, is the lack of concern the executives seem to have regarding salary and "benefits".  When you take a new job, you at least know what the salary and benefits will be.  With the new company, Hubby only knows that he's lost his commission and the "benefits" cost double what they did with the old company.

What irks me is that pay day is the 15th and the 30th of each month.  The new company didn't even process payroll until the 16th, a FEDERAL holiday, meaning no one got paid until the 17th!  It's all processed for direct deposit so we checked our bank on the 17th.  No deposit.  Checked with the bank on the 18th, no deposit.  Hubby called the HR girl and she informed him that she had a problem processing his pay and they had to mail him a check.   Still haven't received the check.  Why the heck didn't she let Hubby know this on the 16th?  At the very least, she could have sent him an email!

The new company is large and does a lot to promote positive moral among the employees.  Last week, they held their company-wide quarterly meeting.  It was held at a very large convention center in Chicago with catered lunch and 3 celebrity guest speakers.  Each employee was entered into a raffle drawing.  They gave away ten Samsung 60" Smart TV's, ten Apple iPads, ten Beats Headphones and various smaller prizes.  Even though Hubby didn't win anything, he enjoyed the meeting.  Because the company exceeded it's 2014 sales goal, every employee who worked during 2014 received a trip to Jamaica.  I can't believe how much the company spent on that meeting and they do this 4 times a year!  Promoting positive moral among employees is a great thing, but it means nothing if the company doesn't also take care of the employees with salary and benefits.

It's caused an unbelievable amount of stress for Hubby which, of course, means I'm stressed too.

My girls both asked for scarves for Christmas.  Being the crafty mom that I am, I had the great idea (on Dec. 10th) to crochet them each a scarf.  It took me a few days to get the yarn, but I still thought I'd get them done in time for Christmas Day.  Then I got sick and that changed all my plans. 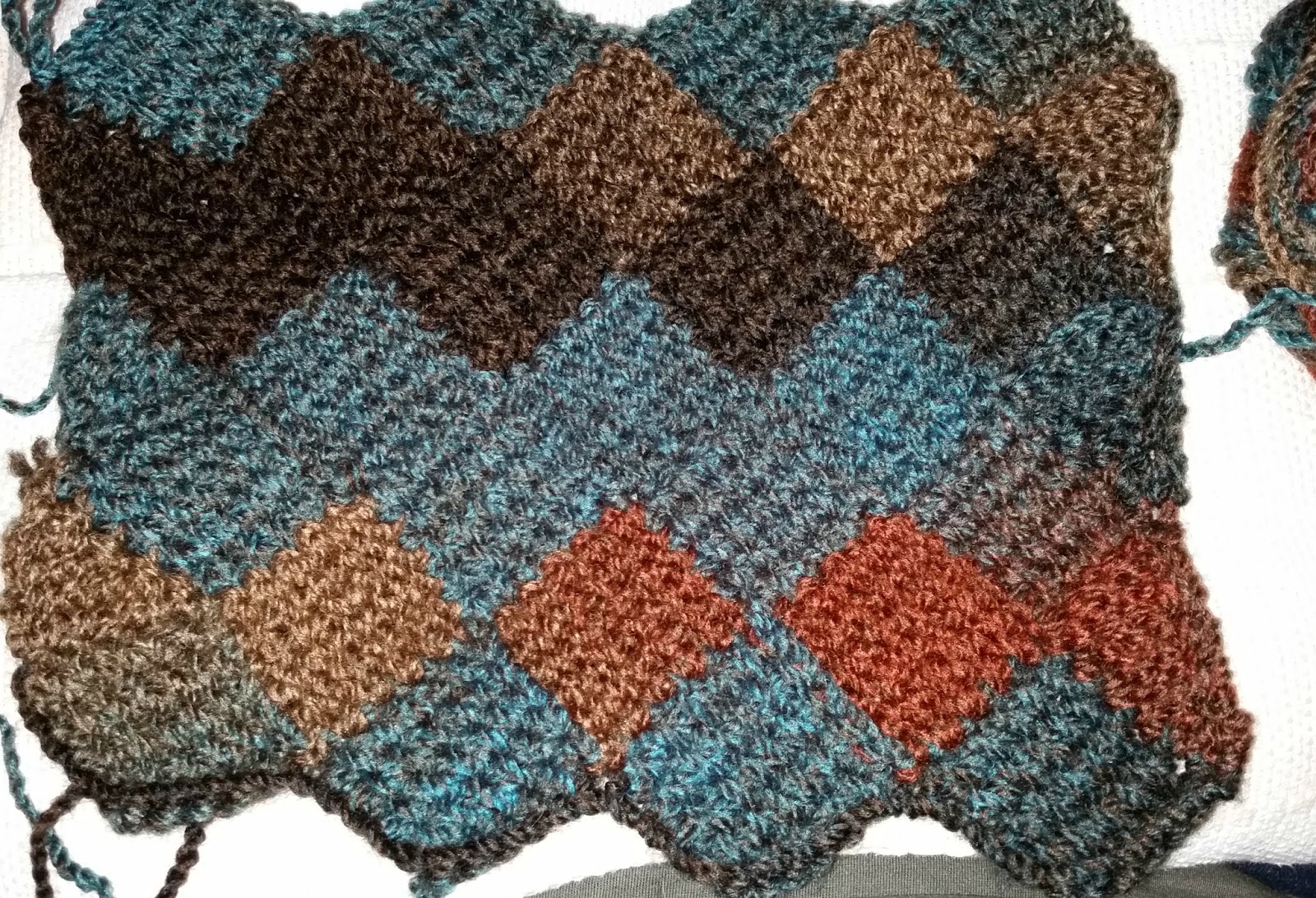 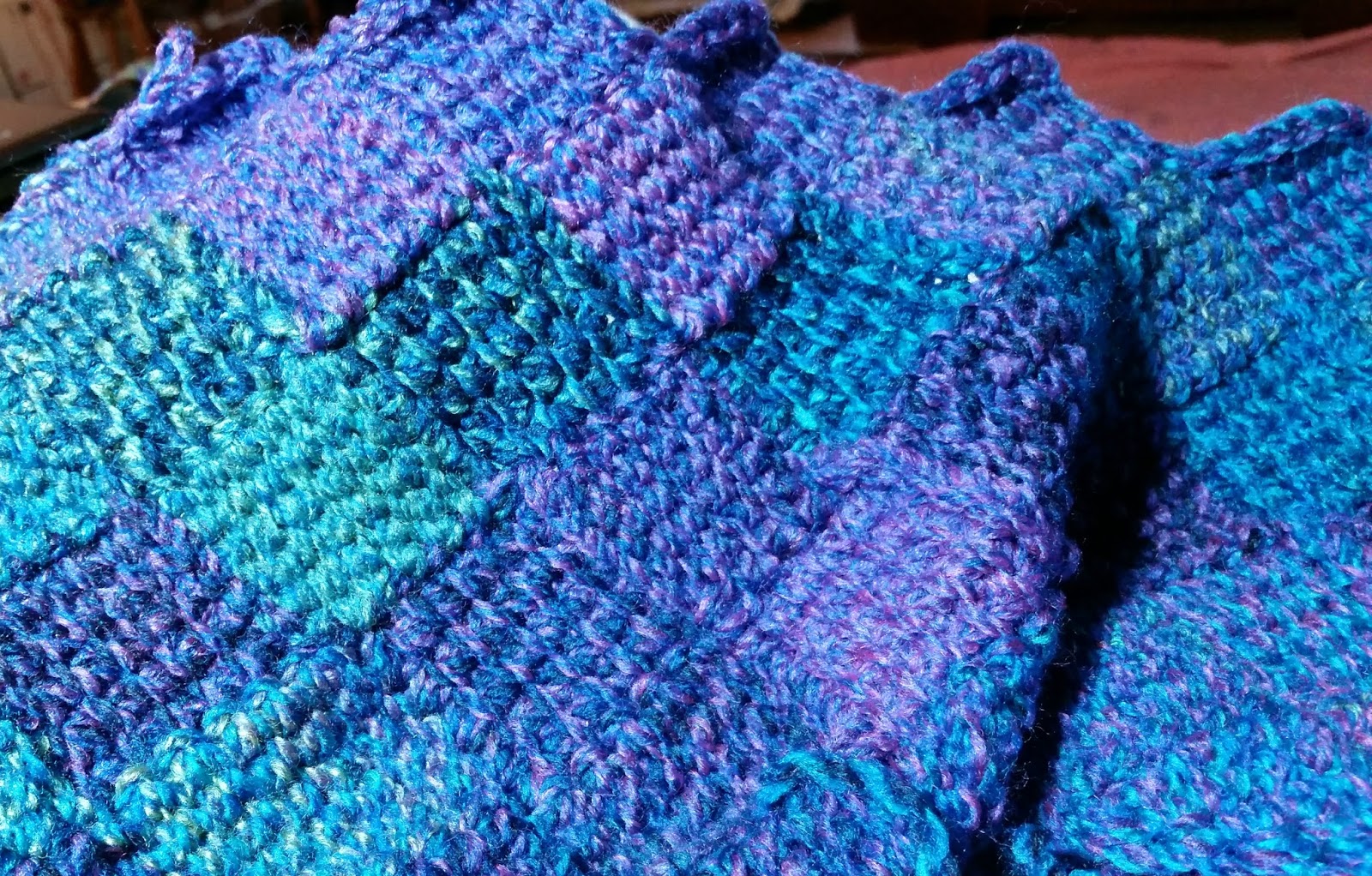 Each of these were crocheted with my own version of Entrelac Tunisian Crochet.  Many tutorials for this type of crochet are available, but they all involved too much yarn cutting and tying on for me.  In all the tutorials I looked at, the piece is never turned to work the next row like in regular crochet.  I came up with my own way to turn the work and continue working the pattern without all the cutting and tying on.   I really like the texture these scarves have and they are heavy and warm.  Perfect for the sub-zero temps and windchill we're having this winter.

I was digging around way in the back of my storage closet and pulled out a large plastic storage tub filled with things I've forgotten about.  Among the baby clothes, blankets and bibs, I found a bag with yarn and a 30 year old UFO crochet project.  Yep, I said 30 years! 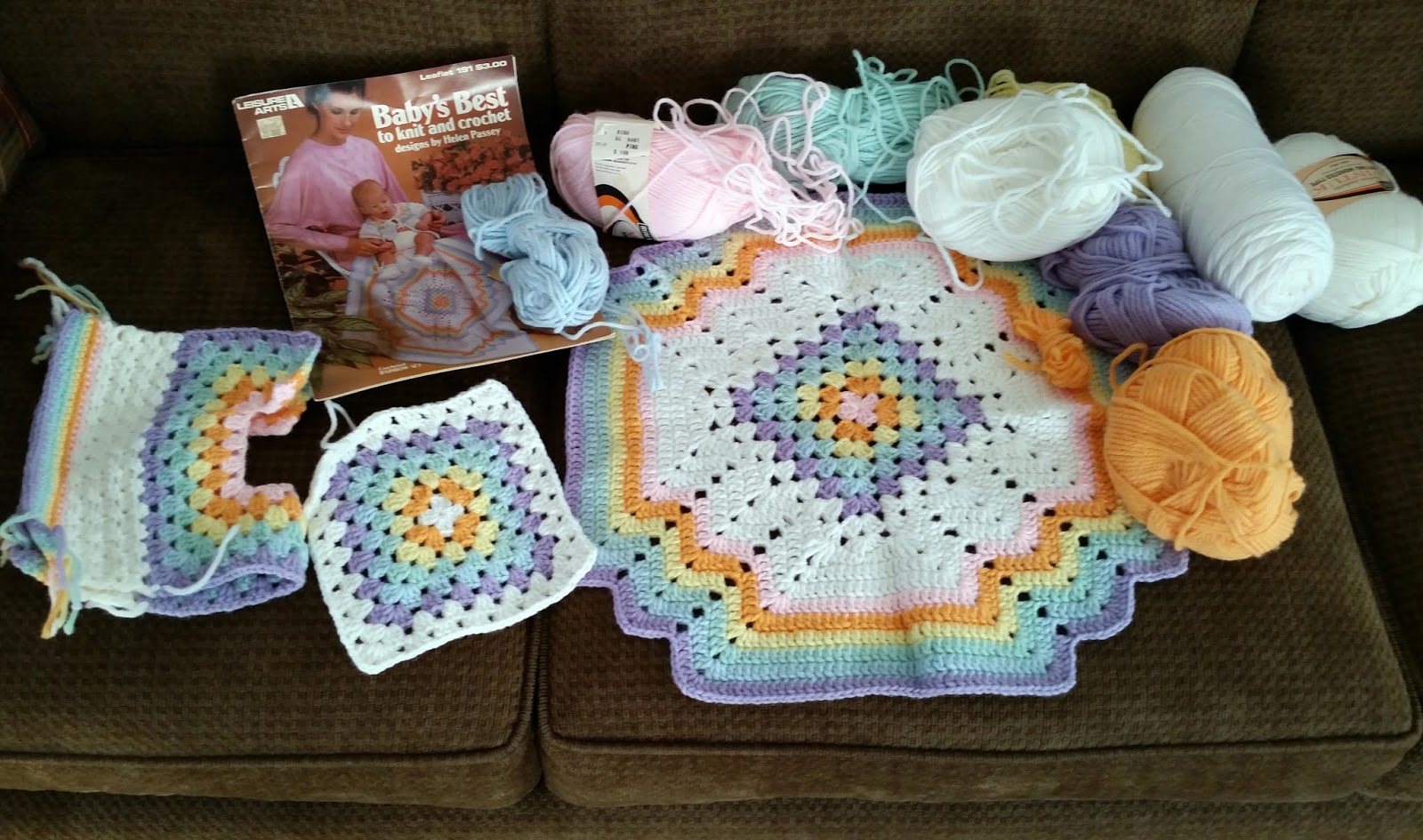 I crocheted the baby blanket for my cousin's first baby way back in 1984.  I had enough yarn left over that I started a second blanket and the little matching sweater.  I can't remember, but I don't think I had another baby in mind when I started these a second time.  Way back then, this baby yarn was super soft and now it feels icky.  It's scratchy, dry feeling and I can't imagine ever putting it near my skin, let alone a baby's skin.  I could hardly stand to touch it!  I think I'll be getting rid of the old yarn and I haven't decided what to do with the unfinished blanket and sweater. Can yarn be restored to it's original softness?

I participated in a Mailart Exchange for Valentine's Day.

Mailart sent to Shelley.  I had fun designing and stitching this.  It was my first mailart piece and I'm sure I'll be making more.  I forgot to get pics of the extras I included.  I made a card embellished with hearts cut out of the backing fabric.  I also included a skein of DMC floss and a matchbook style needle book. 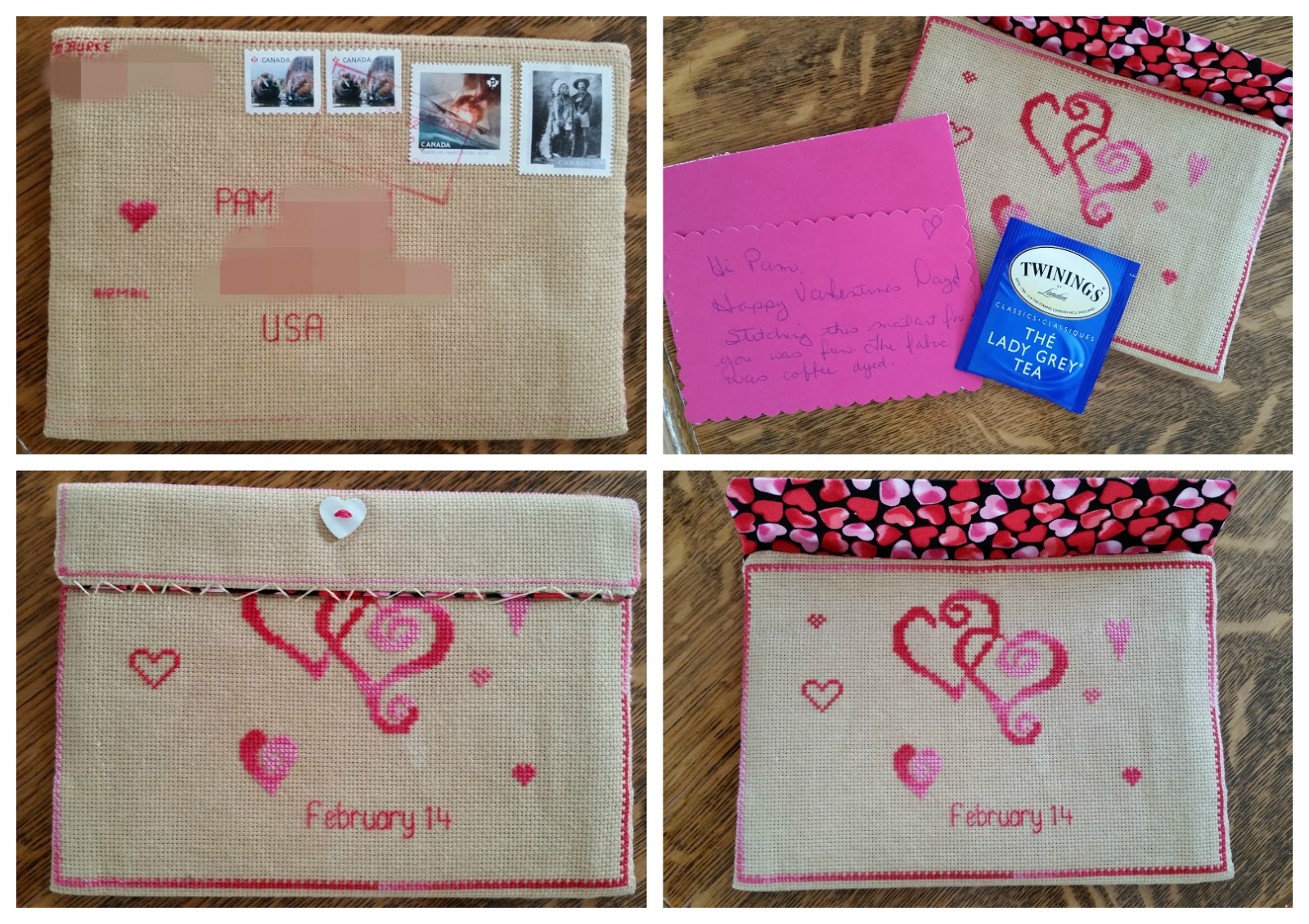 I received this mailart from Debbie B.  She coffee dyed the fabric and used variegated floss.  It was also her first time making a mailart piece and I think she did a fantastic job!  Thanks Debbie!

I'm amazed that these go through the postal service and make it to their destination.


That's it for today.
I'm hoping to catch up soon. 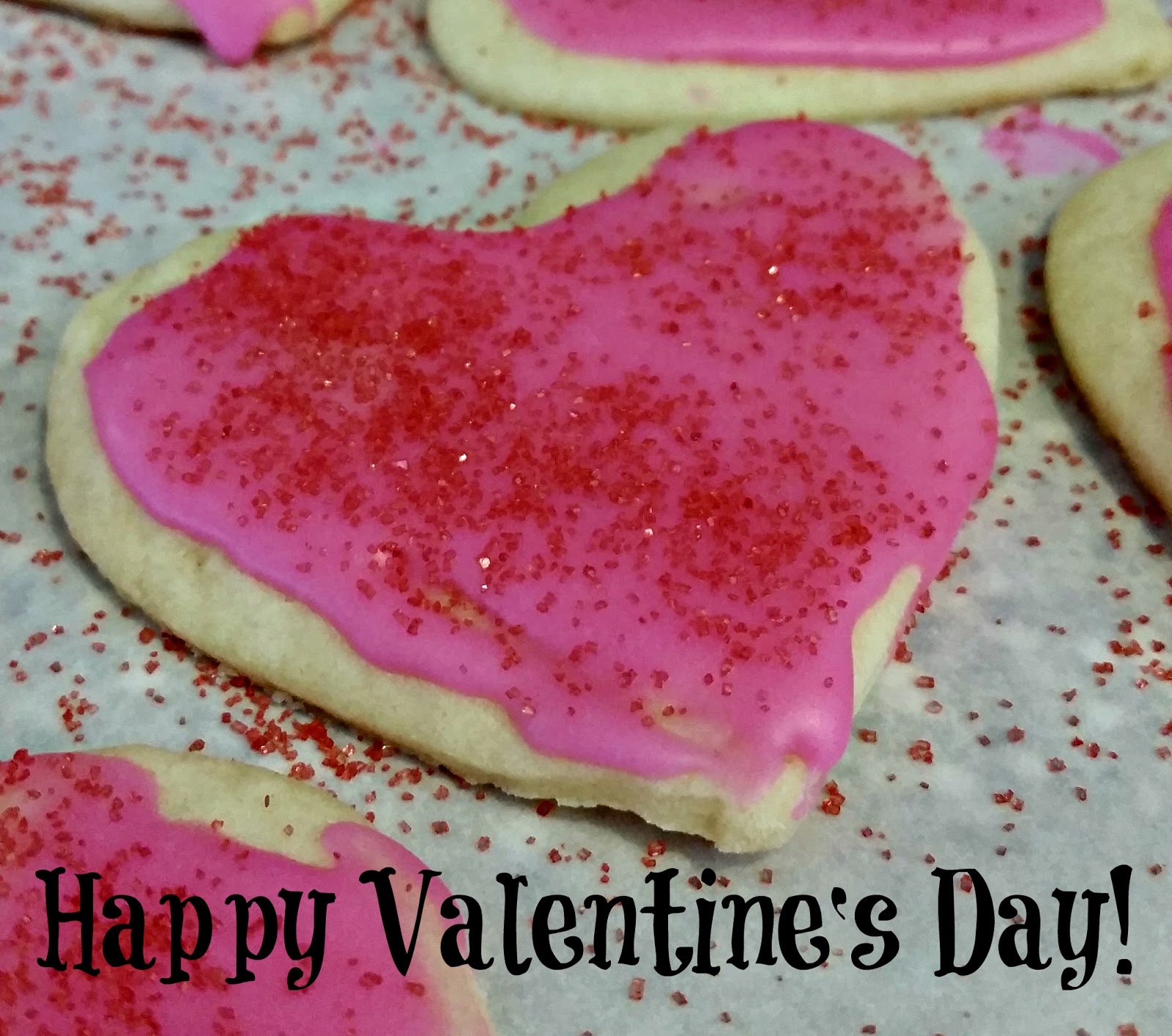 Wishing you a day
filled with
sweetness!