I guess I really do have to give my guy credit.  When I think he's not listening to me, some part of his brain IS listening.

A couple of weeks ago, as I was catching up on reading the newspapers that had accumulated, there was an ad for a floral shop.  The ad had pictured a fresh flower bouquet with a glass flower frog that was included with the glass vase.  I admired the flowers and mentioned that the glass flower frog could be used to as a scissor frog.  It appeared to me that Hubby wasn't even aware that I had spoken.

I didn't think about it anymore, but Hubby must have.  Last weekend, Hubby presented me with this: 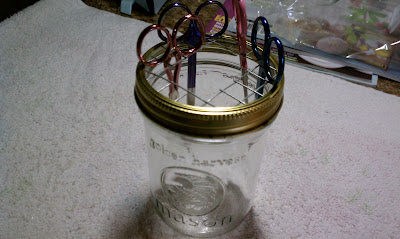 He made me my own scissor frog and ORT jar with a canning jar and some wire mesh!  So cute, he even went into my sewing/craft room and found some of my scissors to put in the jar before he gave it to me.

On a side note, my daughter, the soon to be high school math teacher, told me that a good stitcher wouldn't have any threads to put in the ORT jar because they would calculate and know exactly how much "string" they needed so there would never be any ends to cut off.  She rolled her eyes when I tried to explain why there would still be ends to snip.
Posted by Pam in IL at 11:27 AM 5 comments:

Mom walked right over to the first display table and fell in love with all the pretty fabrics.  She’s never seen the jelly rolls, layer cakes, charm packs or fat quarter sets and didn’t know that there is such a thing as fabric designers.  While she loved all the fabrics, she could not believe the prices (this particular quilt shop owner keeps her prices about double what other shops are).

Mom asked me to take her to Hobby Lobby because she’s never been in one before.  I figured the day was all about her, so we went to Hobby Lobby -- and JoAnn Fabrics and then Walmart too.

Next thing I know, she’s pulling bolts of fabrics and stacking them in the cart and ordered one yard of each.  On to the yarns and then through the art supplies.  She cruised through the entire store and filled her cart.

I kept asking why she needed all this stuff.  After all, she hasn’t sewn, knitted or crocheted in years, never did any artwork, scrapbooking or beading and quit cake decorating when she retired.  She would only say that she wanted it.

It was the same when we went to JoAnn’s and Walmart -- more purchases. 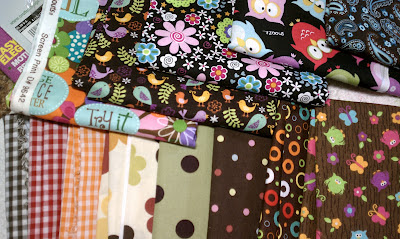 14 different fabrics!  “One yard of each, please.” 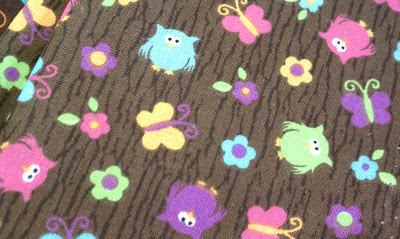 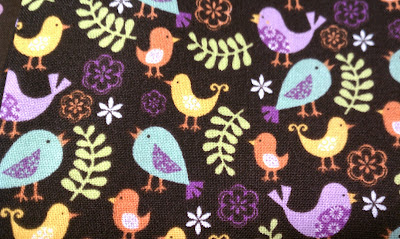 My camera didn’t capture the colors of these very well, but these are my favorites.  I just love the owls and those little birds. 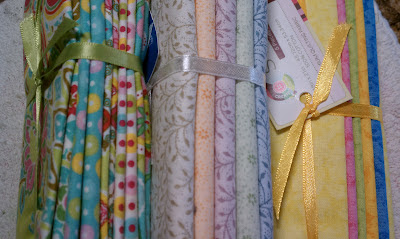 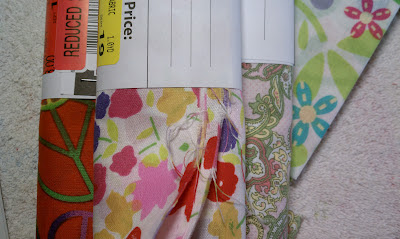 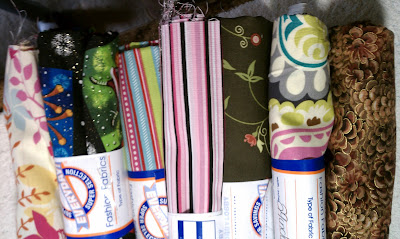 
Much to my surprise, these all ended up in my stash!  Mom decided I just had to have these fabrics.  And all that other stuff she bought will be distributed to my sisters and mom’s granddaughters.

Mom thoroughly enjoyed our lunch and shopping that day and I guess that’s what matters. 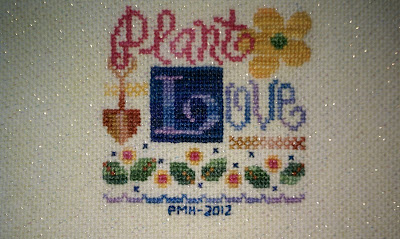 I stitched this Lizzie Kate design and finished it into a magnet for my sister’s birthday. 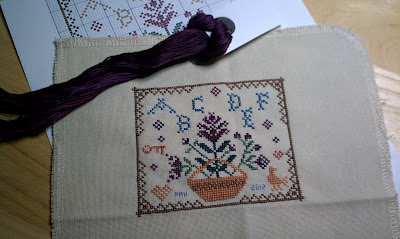 I found a project to use some of the plum floss I won from Victorian Motto Sampler (here).  I am trying to decide if I want to use this stitched piece for the Box Finishing class I’m taking through one of my yahoo groups.

My other options for the Box Finishing class is the Spring Basket (here) piece or stitch another design, but I don’t have any other particular design in mind.


VISUALIZATION and MY NEW PLAN
I recently heard -- again -- that visualization is helpful when one is working towards a specific goal.   I also heard that it's been proven that if one visualizes themselves working out, they get the benefit of the workout as if they had actually done the workout.

Have you ever sat down with your stitching and have the TV on?  Of course, I think we all do, right?  I usually get more out of the program when I'm stitching because I'm a better listener and my mind is more alert than when I'm not doing anything except sitting in a trance in front of the TV.

So, since I don't seem to have enough hours in the day, I've decided that when I sit down with my stitching I'm turning on a workout program and take advantage of that visualization technique to get the benefits of a workout while I'm stitching!  I figure it's a WIN-WIN!  I'll let you know how it works out. 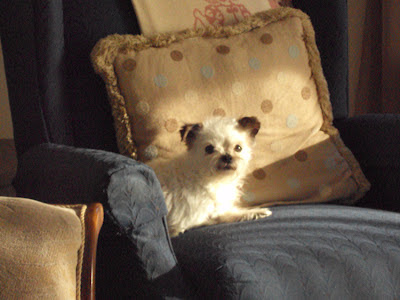 Doggies love their sunshine!  Snickers is enjoying sunning herself in the early morning sunshine.  I had to take this pic from across the room and I'm surprised she even looked in my direction.  She's feeling better with disc problem in her back, but she has a respiratory infection that  she is now being treated for.

Hope you all have a great week!

Until next time,
Happy Stitchin'

Taking inventory…
I’ve been collecting the DMC Color Variations floss and recently acquired some of the newest colors as well as a few more of the older colors. 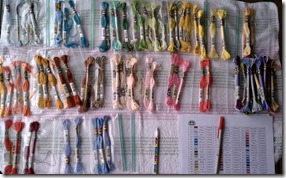 I printed the color card and used that as my inventory list. 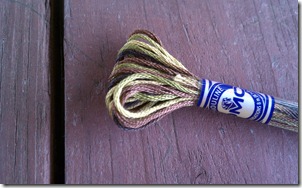 My DD was with me when I found a few of the newest Color Variations and this one is her favorite because it’s called Camouflage!

BLOGVERSARY - Hard to believe that I’ve been blogging a whole year!  I am so blessed to have followers that I can share my stitchy and family stuff with.

ANOTHER SAD ANNIVERSARY – Tomorrow is the 2nd anniversary of my dad’s passing.  He is still missed so much and there isn’t a day that goes by that I don’t think about him.

HERE ONE DAY, GONE THE NEXT – With our unusually warm weather so early in March, the flowers and trees have budded and bloomed really early.  My hardy azalea bush was beautiful in full bloom. And then the cold temps returned.  We had several nights of temps in the freezing range that destroyed the blooms on the azalea bush as well as our fruit trees and other blooming trees.


I’m a bad blogger!
There’s been a lot of Liebster Awards going around these days and I’ve been the lucky recipient TWICE!

I’m truly touched that two fellow bloggers chose to award my blog.  However, the conditions a blogger must satisfy when accepting the award include awarding the Liebster Award to five other blogs with less than 200 followers.  While there are many blogs out there to choose from, I found that they have either already been awarded the Liebster Award, have more than 200 followers or don’t accept awards.

So, as much as I appreciate being awarded the Liebster Award –- twice, I am not able to accept the award.  I do hope the fellow bloggers who awarded my blog will understand.


UNTIL NEXT TIME…
HAPPY STITCHIN’ 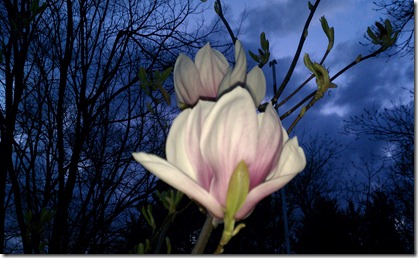 It’s been another busy, busy week and I can’t even remember it all!

My mom saw the oncologist last Wednesday and the news was not unexpected.  This course of chemo hasn’t been providing results.  Mom will have a break until the end of May and then start a different chemo medication.  The Dr is hoping the 6 week break will give her kidneys time to recover and restore some function.  She is also now experiencing a flare up of her congestive heart failure and will need treatment for it during this 6 week break. 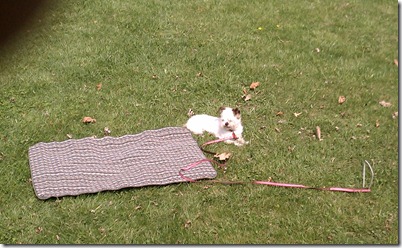 Isn’t it just typical?  I put a rug down in the grass for Snickers to lay on, but she wouldn’t lay on it! 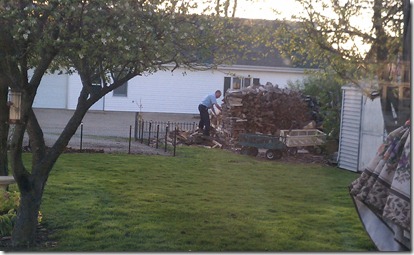 We came home the other day to find half the wood pile had fallen.  We’re not sure what made it fall, but it took Hubby over two hours to restack all the wood.

Email ThisBlogThis!Share to TwitterShare to FacebookShare to Pinterest
Ornament Finishes 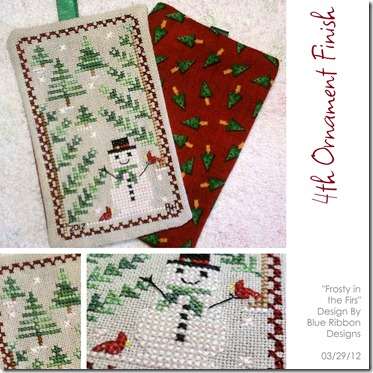 Since these are by the same designer, I stitched these ornies one after the other and then finished them together.
Woo Hoo – I now have 5 ornaments finished so far this year! 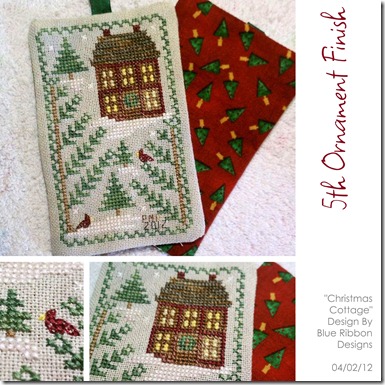 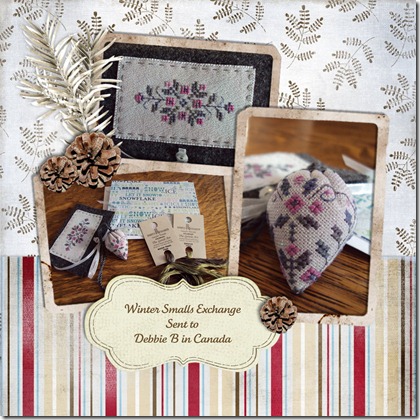 This needlebook and scissor fob was such fun to stitch!  The scissor fob is filled with crushed walnut shells which is supposed to keep your pins sharp.