Yikes! How has it been three months since I've posted?  What happened to summer?

Honestly, I've been struggling.  I push myself to keep going and keep up with everything, but anxiety is contributing to a continuous migraine that I haven't been able to break. 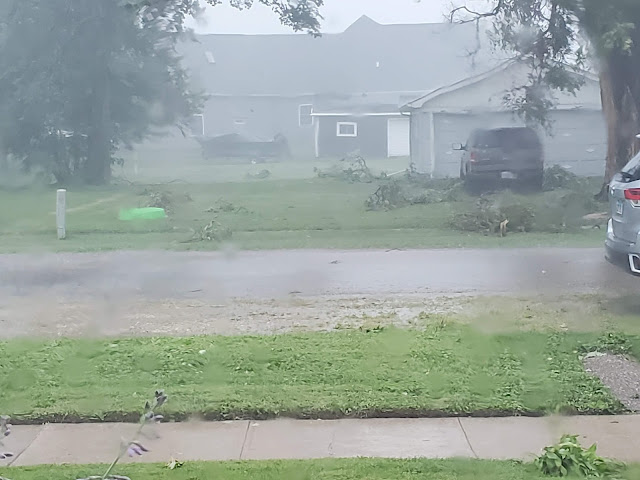 My area, along with many other areas in the midwest, had severe weather on Monday, August 10.  This photo was taken from my front window just as the storm was ending.

I had the most terrifying experience during this storm as I was walking home when it hit.  I was about halfway home and decided to run for home instead of turning around.  Tree limbs were flying and falling everywhere and I struggled to stay upright in the strong wind.  I got hit with one limb and fell, but was able to narrowly dodge a falling tree.  It occurred to me that I might not make it home.  That one block felt like it was the longest block in the world.   The scariest thing wasn't the flying and falling trees and limbs or the wind; it was the sound.  I have never heard such a sound in my life and I can only describe it as a large, loud train being whirled and whipped around in the sky above me.  It took hours for me to stop shaking.

After the storm ended and we all emerged from our houses, we discovered just how bad we were hit.  Shingles and debris everywhere, twisted trees toppled every which way, damaged vehicles, and many houses with roof damage or trees on top of them.

We haven't had any weather service surveys done here, but trained spotters who live in town or have relatives that live in town, have said the twisted trees are indicative of a tornado.  We were without power for over 72 hours and our village water system was down for over 24 hours.

Almost two months later, our area is still recovering from the damage and we still have utility poles and wires down.  Remarkably, there were no serious injuries in our area. 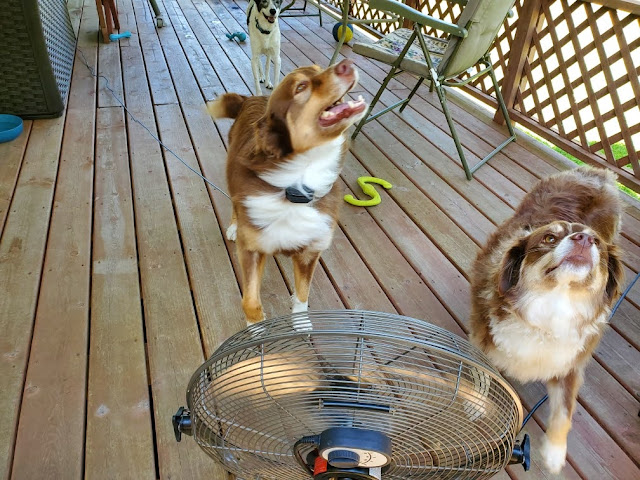 The pups love the new fan we bought for our deck.  It is amazing how much air it moves and how well it keeps the evening mosquitoes away. 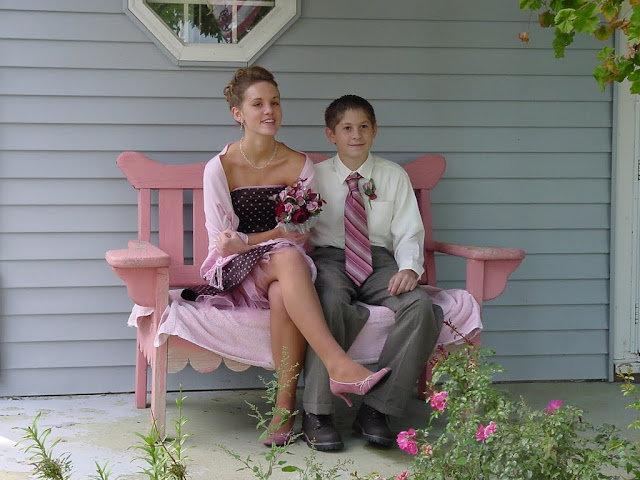 DD#1 and Super Son-in-law celebrated their 6th wedding anniversary on September 6.  This is their homecoming photo from their freshman year of high school.  It feels like their freshman homecoming was just last fall...they both turned 29 this year! 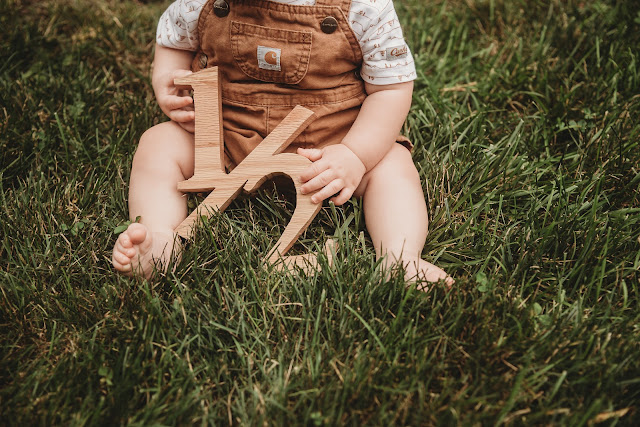 I'm pretty sure the photographer that took Baby L's six month photos took this one just for me so I could share it with you all.  Actually, I think it was taken like this just to show off how cute his Carhartt overalls.  Can you believe Baby L is going to be nine months old?  He is crawling, climbing and pulling himself up.  I won't be surprised if he is an early walker.  He always wants to be standing and walking when he's holding on to something.
I've been babysitting 2-3 days a week since DD#1 returned to remote teaching in August.  What a joy it is to have this time with Baby L.  Some of my favorite times of the day are when I go in to his room to get him up from his nap. He is so genuinely happy to see me and his huge smile warms my heart. 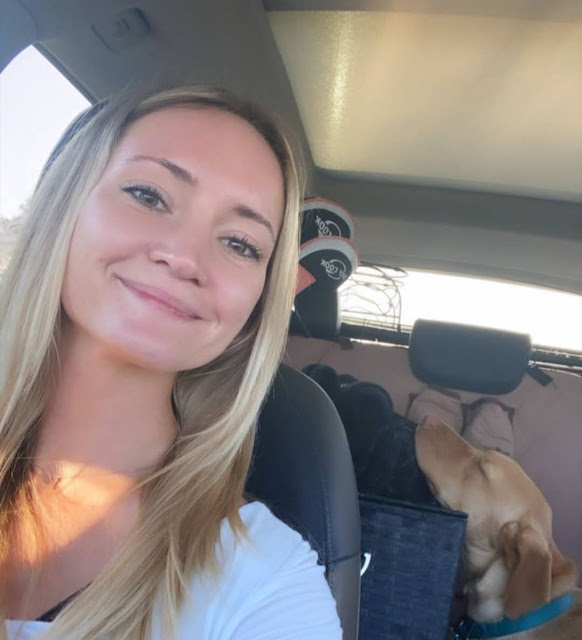 In early August, DD#2 and Callie (the sleeping pup) were finally able to travel to Virginia for her Captain's training.  DD#2 says they probably won't be able to travel for the holidays because they would be required to self-quarantine for 14 days when they return to base.  The tentative plan is for graduation on Friday, Feb 5, 2021 with DD#2 required to report back to Texas by Monday, Feb 8.
Long time readers will remember that DD#2 adopted Hollie while she was still in college and Hollie has lived with Hubby and I most of the past three years.  Last Christmas when DD#2 came home, her intention was to take Hollie back to Texas with her.  When DD#2 saw how close Hollie and Hubby have become, she decided not to take Hollie. 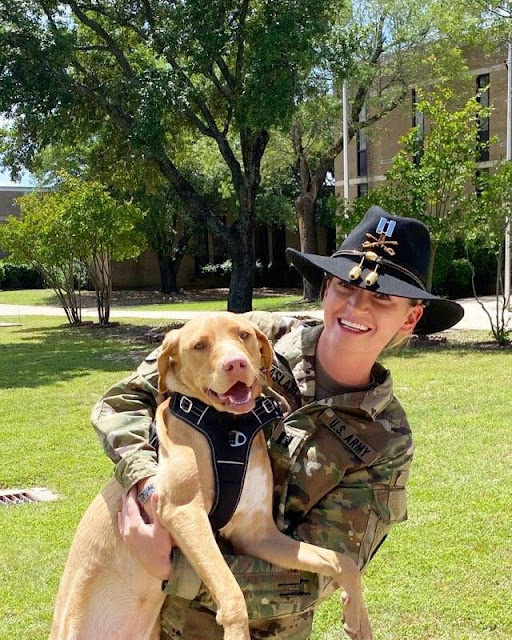 Shortly after DD#2 returned to Texas, she adopted Callie, a Texas Lacy Dog mix.  Callie and DD#2 have bonded and are inseparable. 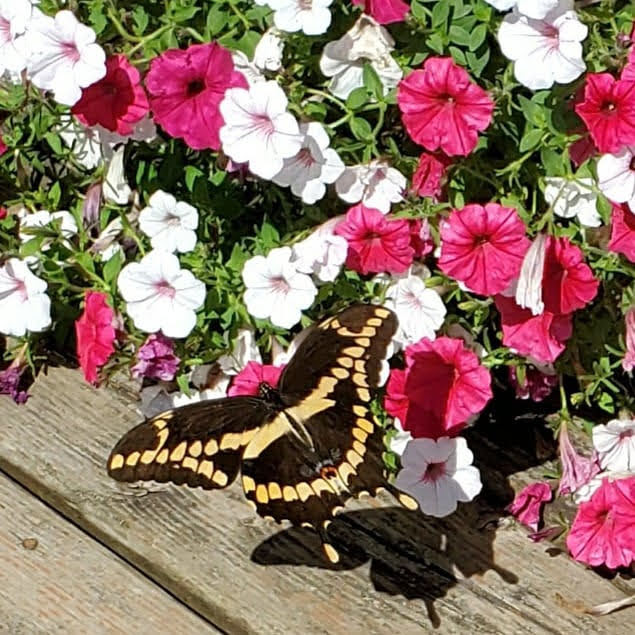 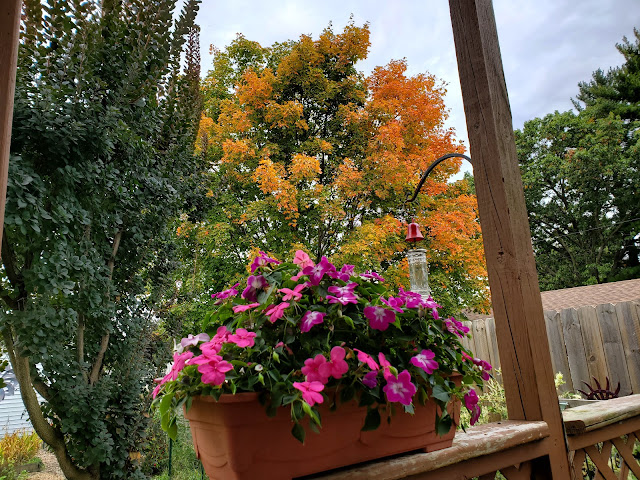 While I enjoy the fall colors, I am really missing the warm, summer weather. 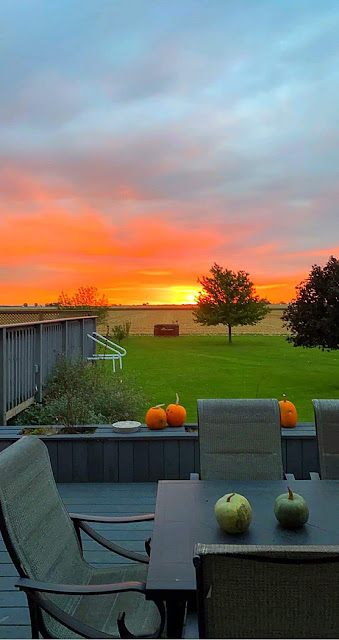 We have had spectacular sunrises and sunsets. 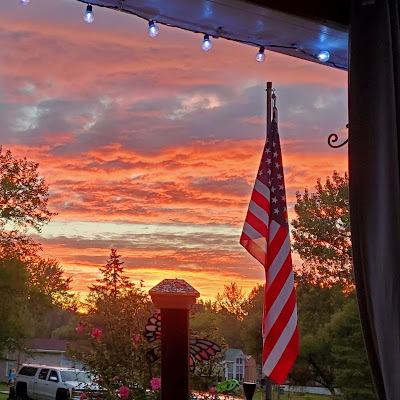 Until next time,
Prayers that you all stay safe and healthy!