Hot & Humid with Storms
We've had very hot and humid weather for a couple of weeks now, but Hubby finally decided to turn our A/C on last week.  Storms moved through our area Friday night, Saturday morning, Saturday night and Sunday morning.  Lots of thunder, lightening and wind.  We had only 3.5 inches of rain from Friday night through Sunday morning, but areas north of us and in the Chicago suburbs had much, much more.  We really needed the rain, but the lightening and wind caused some damage.

My daughters have been de-rouging and detasseling corn during this heat and it's been very hard on them.  Some of the corn fields were severely damaged by the strong winds during the storms.  Whole fields of 7 foot tall corn were blown flat to the ground.  It's not unusual to have some wind damaged corn, but it is unusual to see a whole field of corn laying on the ground.


Small Finish
I finished the scissor fob for my MIL.  She loved it and the pair of scissors I had attached to the fob.  I must say I love the colors too!  Actually that's no surprise, because pink IS my favorite color! 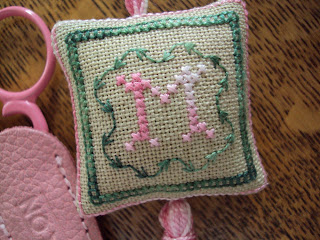 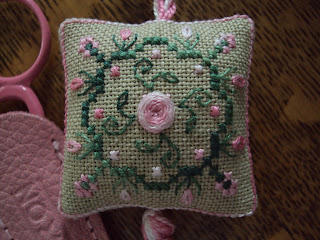 Bridal Shower Gift Dilemma
So, I've been working on the Bride's Tree ornaments for my niece's upcoming bridal shower.  She came out to help with moving my mom's stuff this weekend and when my mom was going through some hand stitched items, my niece commented that she doesn't like "those hand stitched things".  So what do I do now?  I've begun stitching, but I really don't want to spend my time making something she's not going to like.  I'm disappointed, but us stitchers go through this quite often, don't we?

Not Much Else
My mom is staying in her new apartment now and we're finishing up at her house.  I've also been helping my youngest DD get her items for her dorm.  There are so many different colors to choose from for those necessary dorm items, but she wants black.  I'm thinking, "I want one of each color" and all she says is "just get black", lol.  Don't our kids always seem to want or like something different than us?  Actually, that's the exact reason I don't buy clothes for my girls anymore.

Whatever area of the world you are in, I hope you & yours are staying safe.

Until next time,
Happy Stitching!
Posted by Pam in IL at 9:28 AM 8 comments:

It's difficult enough to go from a house with a basement and garage to an apartment, but throw in the fact that it's been my parent's life together for the past 25 years and it seems like an impossible job.  My Dad was one of those guys that could tinker around and fix anything, so he kept everything he thought would be useful someday.  How he would remember what he had, let alone how he would find it when he needed it, is beyond me.

My Grandma on my Dad's side of the family had a large dining room set that includes a buffet, china hutch and huge table with 8 chairs (when the leaves are in, it seats 16).  Mom has decided to give the dining room set to me because I have the space for it.  Back in the 70's the "in" thing was to paint nice wood furniture a brown color and my Grandma always called it "antiquing it".  She painted EVERYTHING this same brown color.  The dining room set is solid walnut and I've decided to strip the paint off to reveal the wood underneath.  It's going to be a huge job, but hubby says once the paint is removed, walnut is a nice wood that will look very nice.  So, I'm in search of a product that will make removing the paint easy.  Is there such a product?

In going through the millions of boxes, we came across some of my other Grandma's sewing items, including her button tin.  When I was a little girl, I remember going to Grandma & Grandpa's and she would let me look at all her buttons.  When I would spend the night there, Grandma & Grandpa would set the table for breakfast the next morning.  Just like it was yesterday, I remember the placemats being laid out neatly in their proper place, the glass cereal bowls being turned upside down and placed in the center of the placemat, the small juice glasses turned upside down and set in their proper place, napkins along with knives and spoons set next to the bowl, the coffee percolator set out on the counter... and at one end of the table, the button tin along with bingo cards.  The radio sat on a shelf in the kitchen and the local radio station played bingo in the mornings.  Grandma and Grandpa used Grandma's buttons for markers on their bingo cards.

I've also been working on a scissor fob for my MIL, who's birthday was in June.  My MIL & FIL have been traveling throughout June, so even though her gift is late, she hasn't been home for me to give it to her.  I still have to assemble it, but I have the stitching done.  I'll post a pic when I have it completed.

I'm still having problems with my neck and left shoulder.  The constant acute pain is much less now, but I'm still having some pain and numbness.  My doctor said I am probably having a Thoracic Outlet Syndrome (TOS) flareup and has recommended that I start the physical therapy exercises again.  I had a biking accident several years ago and injured my right hand, arm and shoulder that triggered the TOS, but through physical therapy was able to relieve the pain and numbness.

Hubby and I were visiting with a friend and his mom a few weeks ago.  Friend's mom started discussing chronic pain and how legalized marijuana could help people avoid addiction to narcotic pain meds.  It was just a discussion until Friend's mom said to me that she felt I had an addiction to massage therapy because I use massage therapy to help with my current neck, shoulder, arm pain.  She said she felt sorry for me because of my addiction and that she really didn't understand how people could become addicted to anything because she's never had chronic pain.  I was really offended and so stunned that I couldn't even comment.

You know how it is sometimes when you can't say anything at the moment, but as you think about it later, you come up with many different things you could have said.  That's what was going through my mind for a few days after that conversation.  Then it dawned on me.  The reason Friend's mom doesn't have chronic pain is because she drinks every day.  She starts out with mixed drinks around 2 pm, switches to wine for dinner and continues with the wine until she goes to bed around midnight.  Kind of takes the sting out of what she said to me knowing that she has her own way of dealing with pain.


Summer is flying by!
Can you believe we're on the downside of July already?  My girls have been de-rouging and detasseling in this high heat and humidity.  They like the money they are earning, but it's so hard on them being out in the heat for most of the day.

My oldest daughter returns to college as a senior in a few short weeks.  My youngest heads off to her first year of college Labor Day Weekend.  Neither girl is planning on coming home much and I'm already starting to feel the pain of having an empty nest.

If you are in the areas with the high heat and humidity, please stay safe and as cool as possible.

Until next time,
Happy Stitching!
Posted by Pam in IL at 10:13 PM 3 comments: