How I Spent My Valentine's Day

Did I get any stitching done?  Nope.  Did I get chocolates, roses and a fancy dinner with Hubby?  Nope.

I did get to spend the day with Hubby.

A little background--I had a board meeting on Monday night and it takes me forever to unwind and fall asleep after a board meeting.  If and when I finally drift off, I'm usually in deep sleep.

In the middle of the night on Monday, Hubby wakes me up telling me I need to check the refrigerator because he has an inkling that it's not working right.  I mumbled something not too nice and forced myself out of bed to check it.  I hear it running, but the temp in the refrigerator side is 45.  I crawled back into bed.

Two hours later, Hubby is shaking me awake again.  He says he thinks we should put everything in the cooler and set it outside.  I can't even force my eyes open.  Hubby gets up and in his slippers and underwear, crosses the backyard to the shed and retrieves the cooler.  I must have fallen asleep because he's violently shaking me awake for the third time.  He informs me that the frig is DEAD.   I tell him to go back to bed and we'd deal with it in the daylight hours.  He turned the TV on instead.

So...we spent Valentine's day going from store to store in hopes of finding a new refrigerator that #1 fit in the opening in our kitchen, #2 fit our needs and budget, and #3 was hopefully in stock and could be delivered right away.   Boy, those refrigerators are expensive!  And I learned that the size we were looking for was considered "smaller than the popular size" and therefore hundreds of dollars more expensive than those bigger ones.

Not the right size, not within my budget, not in stock and can't be delivered for a week were the problems we encountered in each store.  Finally decided on one only to be told it was discontinued, no longer available and another customer has purchased the floor model.  Sheesh!  We're still using the cooler. 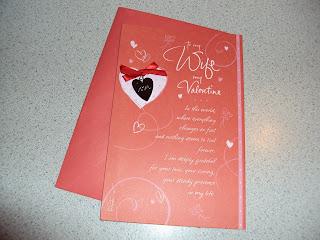 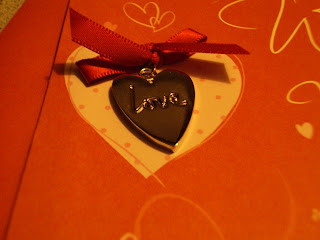 This is my card from Hubby.  He was so excited to give it to me.  He pointed out that it has a cute, little charm on it just perfect for one of my "stitchy" projects. 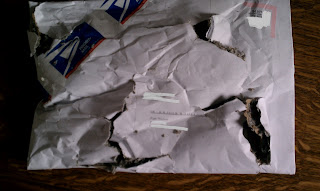 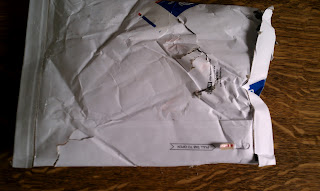 I received this package last week.  My postmaster said he thought it looked like everything was still inside (I wonder how he would know that) and that there didn't appear to be any damage.  Really?  Two items were missing and the items that were in that package were crushed.

Mom Update:  Fourth treatment was given today and lab work done.  We see the oncologist in two weeks and find out if this treatment is working.  We're also still dealing with all the other medical issues, including the hearing problem.  It's been another week of appointments every day.  The next two weeks look like more of the same.


Hope you all had a nice Valentine's Day!

Until next time...
Happy Stitchin'